Multiple Award winning Dancehall act, Shatta Wale said something very intriguing about Stonebwoy’s recent performance at the “best of the best show” at Miami and this looks a bit strange as it got social media buzzing like never before.

We all know Shatta Wale and Stonebwoy are far from coming together due to the musical and lyrical philosophical differences they both have against each other.

Stonebwoy and shatta wale at Ashaiman to the world concert

Shatta Wale was recently seen at the 2017 Stonebwoy’s Ashaiman to the world concert and they both performed together to thrill the fans and we all thought they are back together. But their differences seem unending as they continue to throw jabs at each other day in day out. This time around it appears to be good news to Stonebwoy. 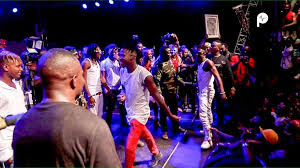 Shatta Wale on one of his recent facebook post lauds stonebwoy on his just ended “best of the best show”performance at Miami and the fans seem to be very excited about it.  This is what he said

Stonebwoy performing at the best of the best show at Miami

Stonebwoy performing at the best of the best show at Miami

“No body should insult Stonebwoy on his recent performance if his fans won’t support us lets support him anyhow we can…Ghanaians isn’t it? Lets educate the bhims ….Shatta Movement didn’t start this comparison,they started God knows….Let’s support our ow!! Who ever say sh*t here BIG F^CK YOU, he said.