Nana Aba Anamoah  who we have seen started the #endtramadolabusewithghonetv has been joined by Charles Nii Armah Mensah popularly Known as Shatta Wale who has also started a campaign against Tramadol abuse.#SayNoToTramadolAbuse

The “Say No To Tramadol Abuse” campaign as we know has been going on for some time now with some media houses mastering the fight to make it a thing of the past.

Some media houses like GHONE TV started the #endtramadolabusewithghonetv and off course Ghanaian very vibrant personality,Nana Aba Anamoah spearhead the initiative. some media personalities,musicians and other high profile people courtesy Nana Aba Anamoah and Ghone tv were made to support and push the agenda to stop Tramadol abuse with the #endtramadolabusewithghonetv.

It didn’t end there as Nana Aba’s Show,State of Affairs on Ghone tv keeps championing the agenda to end Tramadol abuse with #EndTramadolAbuseWithGhonetv where she visited some known drug abuse areas in Ghana like Nima,Labadi,Fadama, in Accra and Alabar in Kumasi. Some drug addicts express their opinion on excessive use of the Tramadol drug and how positively and negatively it affects them.

Some also disclosed that they would like to stop but because they are so mush addicted to the drug, it makes it almost impossible to stop abusing it. Others also say when they abuse the Tramadol drug it boost their immune system to work very effectively and productively and so on.

With all these campaigns going on,some medical practitioners have come out to register their displeasure on how the drug is being abused  and the dangers involved. Tramadol is a pain relieve and not to be abused, whenever a person takes in Tramadol it weakens and seizes some amount of oxygen going into the body and this can easily kill you if not properly prescribed. It can make one behaves like a mad man on the street seeking asylum if it is abused.

Tramadol can only be taken in when you have a serious injury or involved in an accident and even with that it has to be prescribed by a Doctor or a Pharmacist.

Just recently,African Dancehall king Shatta wale took to social media to angrily designate his full support against Tramadol abuse and advised the youth to stay away from the drug and focus on making money. He also cautioned his fellow artistes who encourage their fans to abuse Tramadol to stop.

“This Tramol thing must stop ..I bore waaaa ..and those artiste who are teaching their fans tramol life should stop ..Ghetto youth community is not for the Government ..is for Shatta wale …Who wanna join for this fight .. #Drugabuse we can put it to an End …Ghetto youth rise up and make the money ..That’s all mama needs …🙏🏽🙏🏽🙏🏽”

Well for sometime now Award winning Dancehall artiste,Shatta Wale and Nana Aba Anamoah of Ghone tv have been in very good terms and seem to care about each other a lot. If some memories may serve right, when Nana Aba Anamoah was suspended from Tv3, Shatta Wale commiserated with her and the rest was history.

Again Nana Aba Anamoah started a reading campaign,Raising readers where she visits children in their communities to help teach them how to read and pronounce words properly. This also got shatta wale’s attention as he joined Nana Aba to embark on her project and it turns out successful.#raisingreadersgh 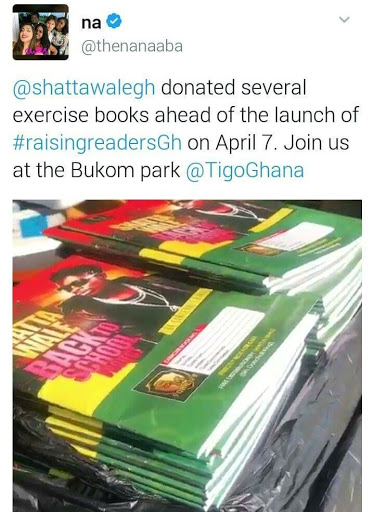 I’m strongly hoping the #endTramadolabusecampaign both are intensively against will turn out very successfully with good trails.

Photos:Shatta Wale meets C.E.O of Kantanka Automobiles for business talks following his facebook post.
Video:What Feli Nuna did at the 2017 Rapperholic Concert got her trending.